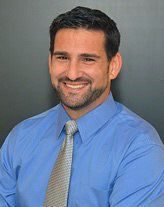 I understand that no two people are quite alike and as such, no two injuries or pains manifest themselves identically. That’s why I offer a diverse range of neuorlogical techniques, chiropractic adjusting techniques, treatments, therapies, along with nutritional support to better assist you and your loved ones’ on the road to optimal health & maximum potential.

Dr. Alexander Charles Frank, a native of Merrick, NY, grew up in Fort Lauderdale, FL, playing high velocity/impact sports such as football and hockey. He experienced many of the consequences of participating in collision sports, such as sprain/strains, dislocations, fractures, and many high velocity impacts. Upon entering high school, he parlayed his fascination for anatomy, physiology and sports and became an athletic trainer. He continued his athletic training career at the University of Florida working in the largest Intramural Sports Program in the world.

Dr. Frank has always felt an inner drive to serve his community. He has been a part of the Fire/EMS service since 1989, beginning at the age of 13. He received his state certification as a Fire Fighter II and Emergency Medical Technician in 1994. Dr. Frank served with Alachua County Fire Rescue during his studies in Gainesville, FL. He continued his Fire-Rescue career after college with the city of Plantation (FL) Fire Department, receiving the Rookie of the Year award for his Battalion in 1997.

Dr. Frank began his collegiate studies at the University of Florida in Gainesville. As a student there, he saw a need for a more rapid response to campus emergencies. Dr. Frank co-founded the University of Florida BIKe (Basic Immediate Kare) Team, the first student run Emergency Medical Service in the state of Florida. Dr. Frank later transferred to and graduated from Florida Atlantic University, focusing his studies in the fields of evolutionary psychology, biology, and early childhood development, which are the foundations for his healing philosophy.

Send us an Email
Call Us Text Us